Chevrolet Equinox 2010-2017: problems to watch out for, engines, pros and cons, photos

The Equinox is the 5-seater SUV with a comfortable interior and good highway fuel economy.

2012 Chevrolet Equinox.
It comes in front-wheel drive or all-wheel drive trims, with a 4-cylinder or V6 engine.

Compared to Honda CR-V and Toyota RAV4, a used Chevy Equinox or its twin the GMC Terrain are priced lower. Should you take advantage of a lower price? Are the Equinox/Terrain reliable? What are the common problems? We have researched this topic for you:

Replacing front or rear stabilizer bar links is not very expensive. If you hear a clunking noise from the suspension, have the vehicle checked out as soon as possible, as most of the suspension problem can make the vehicle unsafe to drive.

Bad front lower control arm rear bushings can cause a looseness in the front end, clunking or creaking noises from the front suspension or shaking/vibration when braking. We found several Youtube videos explaining the repair. The part is not very expensive and is fairly easy to replace. A bad wheel bearing (wheel hub assembly) can cause a humming noise that is more noticeable at higher speeds. Sometimes a bad wheel bearing can also cause the ABS or Traction Control warning light to come on. Replacing a front wheel bearing will cost 1.2-1.5 hours of labor (for one bearing) plus the part. There might be a diagnostic charge to check which bearing is bad. Read more about the wheel bearings.

The GM bulletin 14882 dated March 2015 announces special coverage for the plugged/frozen PCV orifice in the intake manifold that causes an oil leak from the rear main seal. If you bought a used Equinox, it's a good idea to check with a GM dealer if this bulletin was done on your car.

According to the bulletin this problem could be caused by camshaft position actuator solenoid valve failure. The part is sold for around $48-$58 on Amazon and is fairly easy to replace. It's a very common issue in this vehicle. We found several YouTube videos describing this problem and repair.

Many Equinox owners mentioned timing chain kit replacement in the 2.4L 4-cylinder and V6 engines. If out of warranty, this repair might be quite expensive. Watch these videos describing the repair.
Advertisement


There are plenty of complaints about excessive oil consumption in early models. We noticed many of the reported engine problems are related to low oil level. 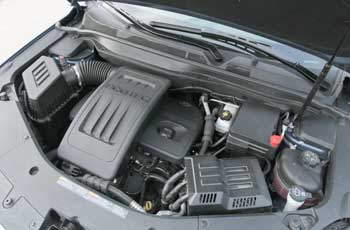 Direct Fuel Injection means that the fuel is injected directly into the engine combustion chambers at high pressure, which improves the fuel efficiency. Read also: Pros and cons of buying a car with Direct Injection.

Timing belt or chain: Both the 4-cylinder and V6 engines have chain-driven camshafts. There is no timing belt. 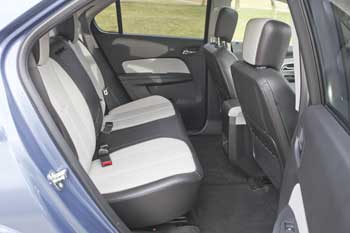 The 60/40 split rear seat reclines and slides
The Equinox and Terrain ride on the same GM Theta platform available with front- or all-wheel drive. Both vehicles have MacPherson struts in front suspension. The rear suspension uses an independent multi-link layout.

Front and rear brakes have ventilated discs. Anti-lock Brake System (ABS) is standard. In the 2.4L models, the steering is electrically assisted. The V6 models have a conventional hydraulic power rack-and-pinion steering. The only transmission choice is a 6-speed automatic.

The majority of reported problems on the forums and at the NHTSA website are related to the 2010-2013 Equinox. Considering this, earlier model years should be avoided or must be carefully checked out during the pre-purchase inspection, especially the engine. The 2014+ Chevy Equinox is a better option. The GMC Terrain is the mechanical twin of the Equinox and is pretty much the same car with different badge.

Given that many reported problems are related to the engine, consider buying an extended powertrain warranty that will cover engine failures. A front-wheel drive model is better on gas and will be less costly to keep on the road in the long run.

Safety: The 2011-2017 Chevrolet Equinox and GMC Terrain have received a four-star overall rating in government crash tests: 4 stars in frontal tests, 5 stars in side impact tests and 4 stars for rollover resistance.

The Equinox offers 63.7 cu. ft. of cargo space.
If possible, discuss the findings directly with the mechanic doing the inspection.

Watch out for oil leaks from the engine or transmission. A low oil level may be an indication that the engine consumes oil. Avoid the vehicle if the engine sounds noisy, even if it's a short rattle when started cold. The rough idle, stalling and the Check Engine light are other indications of engine problems.


Read Next:
What mileage is OK for a used car?
Buying a Used Car: 5 Costly Mistakes to Avoid
Why "Check Engine" light comes on? 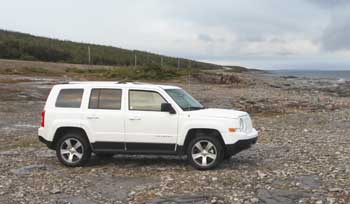