The stylish Nissan Altima comes with a 4-cylinder or V6 engine as a sedan or coupe. The Altima coupe of this generation was available from the 2008 to 2013 model years. 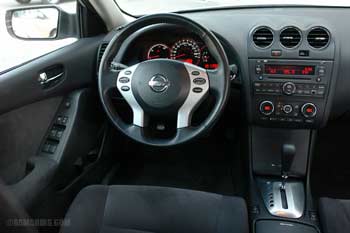 Nissan Altima interior.
It's a sporty mid-size car with a nicely finished snug interior. The Altima offers agile handling and a quiet, comfortable ride. Transmission choices include a six-speed manual or a continuously variable automatic transmission (CVT). Both the 2.5L 4-cylinder and V6 engines have been proven reliable. Thanks to the CVT, the fuel economy is among the best in its class. 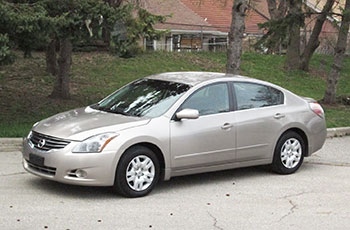 The CVT transmission failures were also mostly reported in 2007-2009 models, although in limited numbers. Overall, it's a good car that can last long. Our main concern is that if the CVT transmission fails, it will be expensive to replace (over $3,500). If you are buying a used Nissan Altima, consider getting an extended powertrain warranty that will cover the cost of a potential CVT transmission replacement. The 2010-2012 were the best years of this generation. One of our friends who worked at a Nissan dealership said he was changing the CVT fluid in his Altima every 50,000 miles or so using original Nissan fluid and the car lasted for over 175,000 miles. Read more about some of the problems below. Oil leaks for the oil cooler are often reported in both 4-cylinder and V6 engines. Oil drops appear on the driveway under the passenger side of the engine. In a 4-cylinder engine, the oil leaks from a paper gasket and rubber seal in the oil cooler, while in the V6, the O-ring behind the oil cooler is typically the culprit. The gaskets (or O-ring) are not expensive, but the access to the area is quite difficult and the job is messy. Watch these videos showing the repair. In a repair shop this job will require 1.5-1.8 hours of labor for a for 4-cylinder engine or 1.0-1.3 hours for the V6 plus the parts.

Tire Pressure Monitoring System (TPMS) can be troublesome. In the Rust Belt, tire pressure sensors stems can corrode and brake off. Replacing a tire pressure sensor is not very expensive ($120-160). We found the Nissan Service bulletin WT13-005 that provides some aid in diagnosing TPMS issues. For example, according to the bulletin, radio frequency interference from a phone charger or other devices can also cause TPMS system not to work.

A faulty brake light switch can cause a variety of problems, including a no-start. This problem is easy to diagnose as the brake lights stop working when the switch goes bad. The repair is also not very expensive.

At higher mileage, coolant leaks are reported from the radiator, cracked plastic filler neck or the radiator hose. This means it's important to check the coolant level regularly and if there is a leak, to repair it before it causes the engine to overheat.

The Check Engine light with the code P0101 could be caused by a dirty or bad mass airflow sensor. The code P0171 could also be present. Other possible causes include a vacuum leak from a ripped intake manifold boot, cracked PCV hose or bad PCV valve. The repair will depend on the diagnosis.

Exhaust leaks and rattling loose exhaust heat shields are common. The muffler end pipe can break off due to corrosion. We advise visiting a local muffler shop for a repair quote, their prices are usually reasonable and they can weld/fabricate parts on the spot. The catalytic converter may fail at higher mileage; it's an expensive part to replace.

A bad wheel bearing can cause a humming noise noticeable at high speed. The noise gets louder when changing lanes. The vehicle must be properly diagnosed and the noisy wheel bearing will need to be replaced ($280-$400 to replace one wheel bearing). 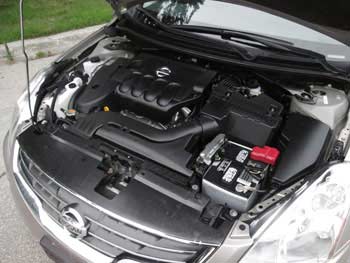 QR25 engine, 2008 Nissan Altima.
Overall, it's a solid dependable engine; it can last long with proper maintenance.
The praised 270-hp 3.5L V6 VQ is strong, smooth and refined. The VQ engine has been used in many other Nissan vehicles since the early 00's and is also proven to be very reliable.

Timing belt or chain: Both the 2.5L 4-cylinder engine and 3.5L V6 have a timing chain; there is no timing belt. The timing chain doesn't need to be replaced at regular intervals.

2008 Nissan Altima hybrid.
What to look for when buying a used Nissan Altima: Check all the accessories inside: the air conditioner, windows, the audio system, etc. Check the audio system display as with age parts of the display are known to stop working. During the test-drive, watch out for whining or humming noises that are more noticeable at acceleration or higher speeds; some of the noises could be caused by a worn out CVT transmission. If there are any signs of transmission problems, avoid the car. Read more: Signs of automatic transmission problems when test driving a used car. See if the driver's seat shifts during turns, there are some complaints about this issue. Read also: How to inspect a used car - illustrated guide. Before buying, have the car properly inspected by a mechanic. Read also: What mileage is OK for a used car?

Mechanical: The Altima has disc brakes on all four wheels. Antilock brakes were optional on 2007 4-cylinder model, standard on the V6. Electronic stability control was optional in early models, standard on all trims from 2010.

Handling and ride: The Altima handles well, with a good road feel. The ride is firm, but not punishing. The 4-cylinder engine is a bit noisy on acceleration; otherwise, it's a fairly quiet car.


Read also:
Pros and cons of buying a car with a CVT transmission
Check Engine Light: What to check first, repair options
Serpentine belt: When to replace