The primary or front three-way catalytic converter is placed close to or within the exhaust manifold.

If you want to know about the catalytic converter setup in your vehicle, check the Vehicle Emission Control Information sticker.

Vehicle emission control information sticker. Larger image.
Typically it's located under the hood or in the engine compartment. For example, this sticker from the 2009 Honda Accord, located on the inside of the hood, says that it has WU-TWC, TWC as well as air/fuel ratio or A/F sensor and rear O2 sensor, or HO2S.

1. Check Engine light staying on, with further diagnosis revealing trouble codes related to the catalytic converter: P0420, P0430 or P0421 and P0431. All these codes point to the efficiency of the catalytic converter falling below the threshold. We wrote a separate article that explains these codes and provides the information on testing: P0420 - Catalyst Efficiency Below Threshold.

Mechanics test the intake vacuum and measure exhaust back pressure through the air/fuel ratio sensor opening to confirm a clogged-up catalytic converter.
If the intake vacuum drops when RPMs increase or if the backpressure measured at the air/fuel ratio sensor opening is more than 2.5 psi at 2,000 RPMs, the catalytic converter is likely plugged up.
Many shops have borescope cameras that mechanics use to check for blockage visually.
There are many reasons that can cause the catalytic converter to clog up, including bad gasoline, increased oil consumption of the engine and coolant leaks from the head gasket, misfiring. Often this happens to cars that are driven only for short trips. 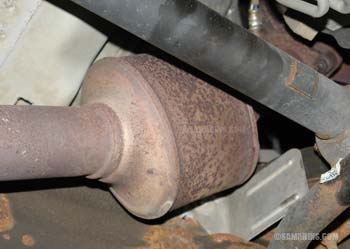 1. The first option is to visit the dealer and have them replace the catalytic converter with a new OEM part. This option is good if you want to use the original part and don't mind paying top dollars for it, or if your insurance covers it. Your dealer will not have the part in stock, but they should be able to get it for the next day or within a few days if the part is available.

3. The third option is a universal catalytic converter which is much cheaper, although it will not fit all cars. For example, it will not fit in cars that have the catalytic converter built inside the exhaust manifold as one unit. In some cars and trucks, however, a universal converter can be welded fairly easily in or even attached with clamps. Check with the local muffler shop as they may be able to fabricate the part on the spot using a universal converter. We recently got this option done at our local muffler shop for the Subaru Forester we had and it worked well.

4. The fourth option, is to buy a used part. This option is often considered if the catalytic converter is built inside the exhaust manifold. A used catalytic converter might be harder to find and the condition of a used part is questionable, but we have seen cases where a used part was the most affordable option and it worked. Your repair shop can check with local auto recycling facilities (wreckers) to source the part.

How do Three-Way Catalytic Converters Work?

The three-way catalytic converter is more effective when the engine is running at stoichiometric air-fuel ratio which is about 14.7:1 for gasoline engines. It means 14.7 parts of air to 1 part of gasoline fuel. To maintain the stoichiometric air-fuel ratio, the engine computer or PCM uses the signal from the air/fuel ratio sensor (front O2 sensor) that is installed before the primary catalytic converter. The rear O2 sensor monitors the efficiency of the catalytic converter. See how the sensor signals look on the scan tool in the article: Code P0420 Catalyst Efficiency Below Threshold (Bank 1)