Only your mechanic can tell you this after at least an initial diagnosis. In some cars, pieces of the broken ceramic monolith from the catalytic converter can get sucked in back into the cylinders and scratch the cylinder walls, further damaging the engine.

That said, over the years we met several motorists who continued driving with the code P0420/P0430 because their mostly high-mileage vehicles had no driveability issues other than the Check Engine light, and there was no other damage. Their explanation was along the lines that the car isn't worth much anyway, so there is no point in putting money into it.

Our advice, have your car checked and discuss your options with the mechanic or service adviser.

The first step is to check for service bulletins, as there are cases where the car manufacturers recommend less expensive repairs instead of replacing catalytic converters. If you don't have access to the factory service manual, many bulletins are available online; search with Google for your vehicle's year, make and model bulletin P0420. We have also posted a list of websites that offer paid access to service manual of different cars at the bottom of this article: Check Engine Light: What to check first, repair options.

For example, the service bulletin 01-010/16 for some Mazda vehicles recommends reprogramming the PCM as a solution for the code P0421 if the catalytic converter is confirmed OK following the testing procedure. The Acura service bulletin 19-049 also recommends updating the PGM-FI (SAE term: PCM) software for the code P0420 in the 2015-17 Acura TLX.

In another example, the Ford Service Bulletin 21-2381 for 2020-2021 Ford Expedition/Lincoln Navigator recommends de-sulfate catalytic converters by driving the vehicle in a certain pattern that includes acceleration and deceleration and driving between 50 mph and 65 mph.

1. Clearing the code and checking if it comes back: To confirm a failed catalytic converter many car makers in their diagnostic procedure for this code suggest clearing the code and then after the engine is warmed up, driving the vehicle in a certain pattern (typically driving steady between 40 mph and 70 mph) for 10-20 minutes.
The next step is to check with the scan tool if the Catalytic Converter Readiness Monitor is set to COMPLETED and check if there are pending codes for the catalytic converter. If one of the above mentioned codes is present or pending, the catalytic converter is confirmed as bad and must be replaced. If no codes are present, no repair is required at this time.
For example, we had one 5-year old low-mileage Ford with the code P0420 that had been driven only for short trips. We cleared the code and drove the car on the highway in different modes and the code did not come back.

2. Comparing the signals from the pre-cat air/fuel ratio (Front O2) sensor to the post-cat rear O2 sensor. This test needs to be done with a scan tool after the catalytic converter is fully warmed up, with the engine running at a certain RPM range (typically1,500-2,000 RPMs) specified in the manufacturer's diagnostic procedure for these codes. 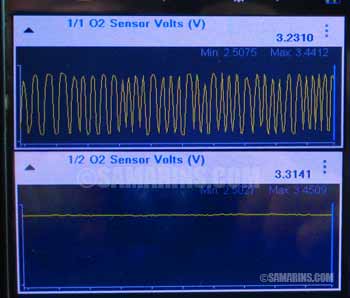 Good catalytic converter front (above) and rear O2 sensor (below) signal. Larger image.
In a good catalytic converter with all other systems working as they should, the signal from the pre-cat air/fuel ratio or front oxygen sensor (front O2) should switch up and down, while the signal from the post-cat rear O2 sensor should be stable as in this upper photo.

If the catalytic converter is bad, you will see the rear O2 sensor signal repeat the signal of the front, pre-cat sensor. In other words, both signals will look similar, as in the lower photo.
This is because if the catalytic converter is bad, it just acts almost like a straight pipe and so the post-cat sensor shows almost the same signal as the pre-cat (front) sensor. 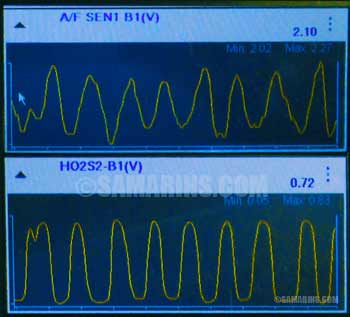 If it's a V6 or V8 vehicle with two banks and the catalytic converter has failed on one bank, it helps to compare both front and rear O2 sensor readings from both banks.

3. Checking the catalytic converter temperatures with the infrared thermometer.

If the catalytic is burned through and acts like a straight pipe, the temperature of the downstream pipe will be lower, as the cat no longer burns off any unburned fuel. The upstream exhaust pipe temperature will be higher because it's closer to the engine.

From our experience, in most cases the codes P0420, P0430, P0421 and P0431 are caused by a failed catalytic converter. Read more: Catalytic Converter: problems, replacement options.

What can cause a catalytic converter to fail sooner? 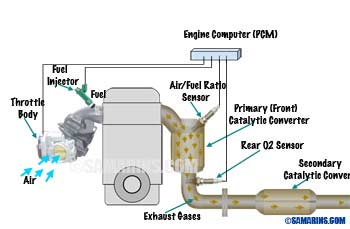