In a car with an internal combustion engine, the cooling system maintains the optimal temperature of the engine and prevents it from overheating. 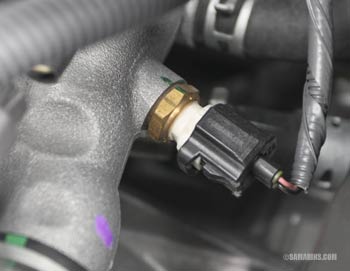 Many cars have more than one coolant temperature sensor. In most cars, the primary ECT sensor (ECT sensor 1) is installed near the thermostat in the cylinder head or block or on the thermostat housing. 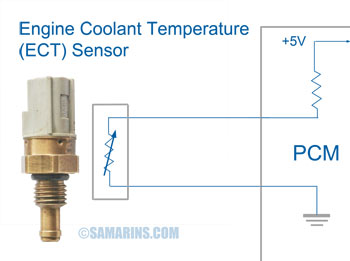 ECT sensor is connected to the engine computer or PCM
A second coolant temperature sensor could be installed in another part of the engine, or in the radiator.

An ECT sensor is connected to the main computer (powertrain control module or PCM). The PCM supplies a reference voltage (typically 5 Volt) and constantly monitors the ECT sensor signal. Based on this signal, the PCM adjusts the engine performance and operates the electric radiator fans when the temperature reaches a pre-determined level.

If the signal from the sensor is missing, or it is outside of the expected range, the PCM turns on the Check Engine light and stores the related trouble code in its memory.

One of the common problems is when the sensor has poor connection inside or in the connector or in the wiring harness. This causes interruptions in the signal to the PCM and the PCM sets the fault. In some cars, symptoms of this problem show up as erratic readings of the temperature gauge. The engine may run in fail-safe mode: The air conditioner may stop working and the radiator fans may run constantly.

The GM service bulletin PI0631F for the 2012-2013 Chevrolet Impala mentions the issue with the wiring harness rubbing on the front right side of the transmission. If any of the wires are damaged or shorted, it could cause many different trouble codes, including the ECT sensor codes P0117 and P0118. The harness must be repaired to correct the problem.

Corrosion at sensor terminals or connector can also cause sensor-related faults. For example, the Ford service bulletin TSB 11-10-5 describes the problem in the 2010-2012 Fusion, Escape, Transit Connect, as well as Mercury and Lincoln branded vehicles with the 2.5L engine: water contamination in the sensor connector can cause codes P1285, P1299 and/or P0128. Depending on the severity of the corrosion, the connector and the CHT sensor must be cleaned or replaced.

The bulletin SI M17 06 12 for some R55, R56, R57 and R58 MINI Cooper/CooperS vehicles describes a similar problem with the corrosion inside the engine coolant temperature (ECT) sensor that can cause inaccurate engine temperature reading. The repair involves installing a new sensor and retrofitting a few related parts.

Many Check Engine light codes related to the ECT sensor could also be caused by other reasons, such as a bad thermostat or issues with the cooling system, including even a leaking head gasket. The problem must be properly diagnosed. Of course, considering that the ECT sensor is not an expensive part, it's often recommended to be replaced if suspected to be malfunctioning.

Because the tip of the sensor has to be immersed in coolant, the low coolant level or air pockets inside the cooling system can cause the signal from the sensor to be incorrect. The coolant level always has to be checked first when dealing with cooling system problems. The ECT sensor connector must be checked for damaged pins or corrosion. There are several ways to test the ECT sensor; you can find the correct way in the service manual.

Testing the ECT/CHT sensor Resistance: One way is to measure the resistance of the sensor at different engine temperatures and compare the readings to the specifications listed in the service manual. 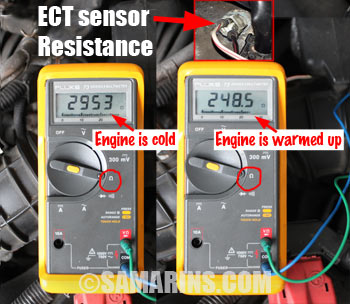 The resistance was 2,953 Ohm when the engine was cold. It dropped to 248.5 Ohm after the engine had been fully warmed up; see the photo. This sensor is within specifications. Of course, the resistance specs vary depending on the car.

Checking the ECT/CHT sensor Voltage: Another way to test the sensor is to measure the voltage across the sensor terminals with the ignition on. 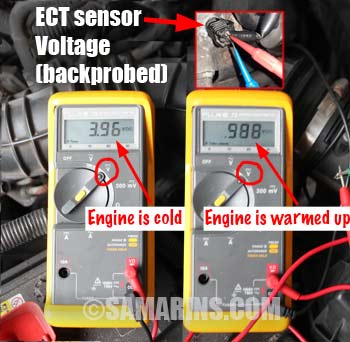 Since the resistance of the sensor drops as the engine warms up, the voltage drops too. In this photo, we back-probed the ECT sensor, so it stays connected to the circuit. When the car was cold, we measured 3.96 Volt. On a fully warmed up engine the voltage dropped to 0.988 Volt. With the sensor disconnected, the multimeter will show 5 Volt.

If there is no voltage, you know that the circuit is either open or shorted to ground. For example, one of the wires in the sensor harness could break or rub against a metal part and short out.

Compare the ECT or CHT sensor readings to other temperature sensors: An example of another sensor that measures the temperature is the intake air temperature (IAT) sensor. 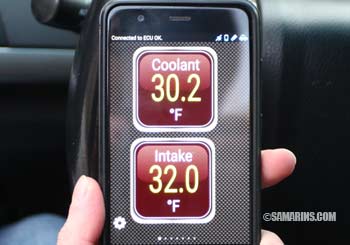 As you can see in the photo, the IAT sensor measures 32°F inside the intake, while the ECT sensor measures 30.2°F. The small difference is because the air warms up faster in the morning than the metal engine. If the difference was much greater, it would mean that one of the sensors measures the temperature incorrectly.

Diagnosing intermittent temperature sensor problems: If there is an intermittent problem in the ECT or CHT sensor circuit, mechanics use a scan tool to diagnose it. 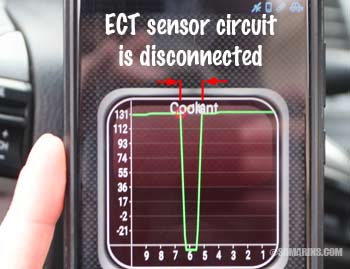 Intermittent fault in the ECT circuit.
With the scan tool connected, a mechanic monitors the sensor voltage while tapping lightly on the sensor and wiggling the harness and connector. A change in voltage indicates the problem area. Another way is to monitor the ECT temperature.

To demonstrate, we monitored the coolant temperature with the Torque app, see the photo. We simulated an intermittent bad connection by quickly disconnecting and reconnecting the ECT sensor. As you can see the temperature momentarily drops and then comes back up. 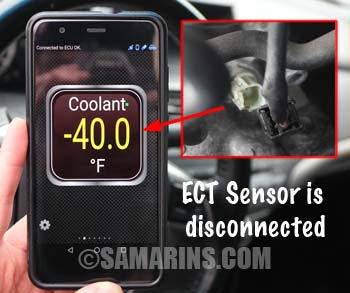 Disconnecting the ECT sensor will show as -40 degrees on the scan tool.

In most cars, replacing the ECT or CHT sensor is easy. In many cars, the sensor is held by a clip. In some cars, a special deep socket might be required.

Replacing the engine temperature sensor in a repair shop costs from $59 to $129 (labor) for an average car. The sensor (part) is not very expensive; it's best to use an OEM part. After the ECT sensor is replaced, the cooling system needs to be refilled and bled of air pockets.

The cooling system is under pressure when hot! If you decide to replace the ECT sensor as a do-it-yourself project, check the service manual for instructions and safety precautions. When replacing the CHT sensor it's important to torque the new sensor to the specifications. We posted a list of websites offering paid access to service manuals for different cars at the bottom of this article.

Is it necessary to replace the ECT sensor whenever the thermostat is replaced? No, it's not necessary. However, there might be an intermittent fault related to the engine temperature control and it's difficult to determine if it is the thermostat or the coolant temperature sensor. In this case, both are usually replaced at the same time. Read more about the thermostat: how it works, symptoms, problems, testing.


Read Next:
Thermostat: how it works, symptoms, problems, testing
Why "Check Engine" light comes on?