The Exhaust recirculation (EGR) system redirects a small amount of exhaust gases back into the engine intake to lower the combustion temperature.

Honda EGR valve. Click for the larger photo. See also: Toyota EGR valve
The EGR valve is the main component of this system. It controls the flow of exhaust gases from the exhaust manifold into the intake manifold. See the diagram.

In some cars, an EGR valve is controlled by a vacuum. In most modern cars, the EGR valve is operated by a built-in electric step motor. 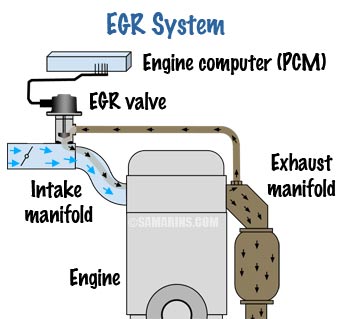 The most common problem with an EGR valve is when carbon build up on the valve cause it to stick (see the photo below). In worst cases, an EGR valve and the EGR passages can be completely clogged up.

Symptoms of an EGR valve that is stuck open include rough unstable idle and stalling. Often a car stalls when stopping after exiting the highway.

If the EGR system is clogged up, or the valve is stuck closed, the combustion temperature increases. This may cause pinging (detonation), as well as surging on light acceleration. In a diesel engine, a bad EGR valve is one of the causes of a black smoke. The Check Engine light might also come on in either case.

EGR valve problems are common in both, gasoline and diesel engines.
In 2005 and later Dodge Caravan and Chrysler Town & Country, the code P0404 can be caused by a failed EGR valve. See some YouTube videos explaining the repair.

In some early Dodge Ram trucks with a 5.7L V8, the code P0406 could also be caused by a failed EGR valve. See these YouTube videos for more info.

Carbon buildup causes an EGR valve to stick
EGR valve failures causing the code P0401 were common in the Mazda CX-7 vehicles with a 2.3L turbo engine. In many Mazda/Ford 4-cylinder engines, the code P0401 can be caused by a sticking EGR valve. The EGR valve must be replaced to repair the problem.

Not all EGR problems are caused by a failed EGR valve. Clogged EGR passages can cause problems similar to a bad EGR valve. In some older Ford vehicles, some EGR codes were caused by a bad DPFE sensor. Read more: Code P0401.
Another problem with an EGR valve is when it gets burned through or "explodes". This often happens when a clogged-up catalytic converter causes excessive pressure in the exhaust manifold.

Once the vacuum is released, the valve should close fully. Vacuum lines and the control solenoid must be tested too. In older Toyota vehicles, for example, a failed EGR control solenoid (VSV) can cause the code P0401. Replacing the VSV is a lot cheaper repair.

In a diesel engine, opening and closing the EGR valve with a scan tool or a vacuum pump while the engine is running, should cause change in the mass air flow sensor readings. If there is no change, the EGR valve is most likely stuck or clogged up.

It's possible to check the resistance between the EGR valve terminals using a multimeter or activate the EGR valve from a 12V power source to see if it operates. You can find the testing direction in the factory service manual. We posted a list of websites offering paid access to service manuals for different cars at the bottom of this article: Check Engine Light: What to check first, repair options.

Often, an EGR valve might work while testing, but stick intermittently. When there is a suspicion that the EGR valve is sticking, or it shows carbon buildup, it is usually replaced together with a new gasket. Cheaper aftermarket parts are available. Whenever the EGR valve is removed, the EGR passages need to be checked for carbon buildup.

The GM bulletin 15-NA-035 for the 2014-2015 Chevy Cruze with a 2.0L Diesel advises that a stuck-open EGR valve can cause the engine to stall or not to start. The repair is to replace the EGR valve.

The BMW issued the Emissions Recall Campaign for the X5d (E70) and 335d (E90) Diesel models that were produced from April 2009 to March 2011. The EGR valve must be replaced with an updated part.

The Toyota bulletin T-SB-0027-16 for 2010-2012 Prius models describes a vibration and tapping noise at a cold start that can be caused by a sticking EGR valve due to carbon buildup. The repair includes reprogramming the engine ECU, replacing the EGR valve and modifying the wiring harness.

Several manufacturers issued recalls and software updates related to the EGR valve. Chrysler issued the campaign P49 to replace the EGR cooler hose in the 2011-2013 Jeep Grand Cherokee with a 3.0L Diesel engine. FCA (Chrysler) announced the campaign T23 to reprogram the PCM for the 2016-2017 Jeep Grand Cherokee, Dodge Durango and 2017 Chrysler Pacifica with a 3.6L engine.

Can you clean a clogged up EGR valve?

To clean an EGR valve, it will have to be removed. In some cars it's easy, in others it takes a lot of work. In our experience, cleaning the EGR valve is more of a temporary fix. Aftermarket parts are not very expensive. An old EGR valve gasket can be damaged too. Given that, we recommend replacing the EGR valve and the gasket instead of cleaning it. Of course if you want to try, there are plenty of videos on YouTube explaining the process.