All modern cars are equipped with an Evaporative Emission Control (EVAP) system. The EVAP system prevents fuel vapors from the fuel tank from escaping into the atmosphere. Read how the EVAP system works and see the diagram below.

The EVAP vent control valve (solenoid), or vent valve, is a part of the EVAP system. It controls the flow of outside air in and out of the charcoal canister. In some cars, it's called Canister Close Valve (CCV).

In most cars, the EVAP vent valve is located underneath the vehicle, close to or at the charcoal canister near the fuel tank, see the photo. For that reason, it often fails due to corrosion.

The most common problem with the vent valve is when it sticks open or fails. This creates an EVAP system leak and triggers the Check Engine light to come on.

In some Mazda 3 and Mazda 5 vehicles, a leaking vent valve is a common culprit of the code P0442.

Another issue is that some dirt and dust could be drawn into the vent valve through the vent hose and cause it to clog up. This will also trigger the Check Engine light. Some GM trucks are known to have this problem which causes the code P0466. The repair includes vent valve replacement and some modification of the vent valve setup. A clogged up vent valve can cause trouble filling the gas tank.

How the vent valve (solenoid) is tested

The vent valve design and setup varies between different manufacturers. You can find the proper testing procedure in the vehicle's service manual. We have posted a list of websites offering paid access to service manuals for different cars at the bottom of this article. In most cars, the vent valve is a simple solenoid valve. It's normally open, which means it should be open with no voltage and closed when the voltage is applied.

As an example, let's test the vent valve in this 2000 Honda Accord. Honda calls it the Canister Vent Shut Valve.

The EVAP valve is open with no voltage applied.
The Honda service manual says to test the valve while it's installed in its place at the canister located underneath the car. For a better demonstration, we removed the vent valve and tested it separately.

The first step, as per the service manual, is to connect the vacuum gauge. We tried applying the vacuum and as you can see the valve doesn't hold it because it's fully open. The vacuum gauge immediately drops to zero.

Typically a bad vent valve will not hold vacuum when activated, or doesn't activate at all. For example, a failed vent control valve was fairly common in early Nissan Rogue SUVs. If you were to test the failed vent valve the same way, it probably wouldn't even click when the voltage was applied, because the vent valve internal parts likely would have been seized.

Replacing the vent valve is not very expensive ($150-$320 part and labor).
Another common reason for the EVAP-related Check Engine light codes is a faulty purge valve or a gas cap.

How does the EVAP system work in a car? 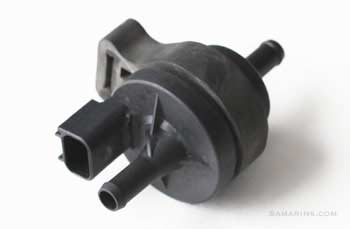