In the early 00's conventional oxygen sensors gave way to more precise air fuel ratio sensors, although they are still referred to as 'oxygen sensors' or O2 sensors.

Air fuel (A/F) ratio sensor
The air fuel ratio (A/F) sensor measures oxygen content of the exhaust in a wider range. It is also known as the "broadband lambda sensor" or "lambda probe."

Problems with air fuel ratio sensors are common. Often a sensor gets contaminated or simply fails. In some cars, the heating element inside the sensor can stop working and cause the malfunction. For example, in many Toyota and Honda cars the code P0135 may be caused by a failed heating element inside the sensor. See how the heating element of the A/F sensor is checked in this article: code P0135. In some cars, a sensor wiring may get shorted out after rubbing against metal parts. For example, in older Mazda 3, the sensor wire may rub against the bracket and short out causing the code P0131. When the engine computer detects that the air fuel ratio sensor signal is out of expected range it illuminates the check engine light.

Most common OBDII trouble codes related to an air fuel ratio sensor are P0131, P0134, P0135, P0133, P0031 and P1135. Are there any symptoms besides the Check Engine light? In some cars you may notice a drop in the fuel economy or some driveability issues.

An air fuel ratio sensor is diagnosed following the manufacturer's troubleshooting procedure for the trouble code that has been set. The first step is to check for related technical service bulletins (TSBs). The wiring and the connector of the sensor must be checked for damage, corrosion, loose pins, etc. 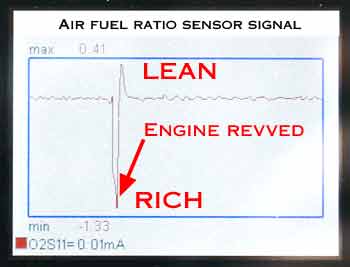 Checking the air fuel ratio sensor with a scan tool.
Then, depending on the trouble code, the sensor signal must be tested with a scan tool. For example, see this chart of the air-fuel ratio sensor signal on a scan tool: when the engine is revved, the signal jumps to "rich", then as the RPM drops and the fuel is cut off, the sensor indicates "lean". After that, the signal goes back to normal. This air fuel sensor works properly.

Often, the sensor may work properly at the time of the inspection. In this case, your mechanic may recommend replacing the air fuel ratio sensor to eliminate the possibility of an intermittent fault.

The engine computer or PCM constantly compares the signals from the front and the rear oxygen sensors (see the diagram). Based on the two signals, the PCM knows how well the catalytic converter does its job. If the catalytic converter fails, the PCM turns on the "Check Engine" light to let you know.
The rear oxygen sensor can be checked with a scan tool or a lab scope.

Typically, the engine bank that
contains cylinder 1 is called Bank 1


The V6 or V8 engine has two banks (or two parts of that "V"). Usually, the bank that contains the cylinder number 1 is called "Bank 1."

In most cars, replacing an oxygen sensor is a fairly simple job unless it's difficult to access. In a repair shop, oxygen sensor replacement costs from $50 to $250 (labor only).

If you want to replace the oxygen sensor yourself, with some skills and a repair manual, it's not so difficult, but you might need a special oxygen sensor socket (in the photo below).
Sometimes it might be difficult to remove an old sensor, as it could be seized in its thread. We found several videos on how to remove a seized O2 sensor.

When replacing an air fuel sensor there are two options: to install an original (OEM) or aftermarket part. Aftermarket sensors work fine most of the time. However, we came across several cases where an aftermarket sensor was causing the problem that was fixed after installing an OEM sensor. 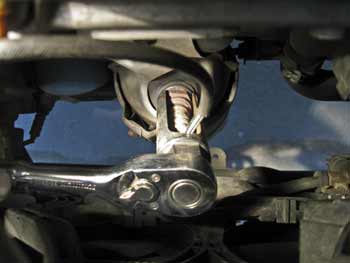 Replacing the oxygen sensor
If the price is comparable, using an OEM sensor is a better option. Another reason to use an OEM sensor is that often manufacturers update the part design to eliminate problems that were discovered after the production.

For California-certified cars, the part number for the air fuel ratio sensor might be different. It's best to order the correct part using your VIN number.