Can you drive with the code P0300-P0308? Driving with a misfiring engine can cause more damage. When a cylinder misfires, unburned gasoline can overheat and melt the catalytic converter, which is an expensive part of the emission control system.
Some manufacturers advise not to drive with a misfiring engine; others recommend driving only in a very moderate fashion and having your vehicle checked out as soon as possible. See the vehicle's owner's manual for details.

A misfiring engine shakes, runs rough (unevenly) and lacks power. Shaking is more noticeable at idle or during acceleration. Some cars misfire only when started cold. The "Check Engine" light on the dash may blink repeatedly or stay on solid. Sometimes, you could also notice a different smell from the exhaust. Watch this video of a misfiring engine.

The most common cause of the engine misfire and the codes P030X in modern cars is a failed on-plug ignition coil. Other causes include:

What can cause the code P0300 - Random cylinder misfire:

How misfiring is diagnosed

The cause of misfire of one of the cylinders should be fairly easy to pinpoint if the problem is present at the time of checking. For example, mechanics can identify a faulty on-plug ignition coil by swapping the coils between the cylinders and checking if the misfire moved with the coil or stayed at the same cylinder. The same procedure can be used to identify a bad fuel injector.

A quick look at the spark plugs can tell a lot. Signs of arcing on the ignition coil also point to the faulty part. An important step is to check for related service bulletins issued by the car manufacturer. If you don't have access to the factory repair manual, Google 'Make Model Year service bulletin code P0301'. See a few examples below. Basics such as compression, timing and fuel pressure will also need to be checked if no obvious fault is found.

The engine might need to be checked for vacuum leaks. Read more: Vacuum leaks: common sources, symptoms, repairs. The short term fuel trim (STFT) and long term fuel trim (LTFT) need to be checked with a scan tool to see if the air/fuel mixture is not too lean. Often a bad mass air flow sensor causes the engine to run lean causing random misfire. Read more about STFT and LTFT fuel trims here.

Valve adjustment may need to be checked, as valves that are out of adjustment can cause misfiring at a cold start, which is, for example, a common issue in some older Honda engines.

If misfiring happens only at idle, the EGR valve and purge valve need to be checked, as either one could be stuck open.

Once the problem is repaired or no longer detected, the misfiring code will clear itself after some driving.

Failed on-plug ignition coils are common in many cars, including BMW, Ford, Hyundai, Mazda, Nissan, Toyota, Volkswagen and GM. A failed ignition coil must be replaced; in a 4-cylinder engine it's a fairly simple job. If spark plugs haven't been replaced in a while, it's a good idea to replace all the spark plugs as well. Worn-out spark plugs require higher voltage to produce the spark, which adds strain on ignition coils.

In many modern cars, especially those with Direct Fuel Injection, carbon buildup on intake valves and the injector nozzle can cause misfiring. Some mechanics may recommend cleaning the valves with a special spray or foam (fuel induction service), as it's less expensive and sometimes helps. The more effective option is to clean the intake valves manually. Read more about carbon buildup on intake valves in this article. Clogged fuel injectors need to be replaced too. This repair is costly, as it involves more labor; the intake manifold and some other parts will have to be removed. We found a number of YouTube videos on the subject.

Vacuum leaks, as well as a stuck-open EGR valve or purge valve (solenoid) can cause misfiring that mostly happens at idle, but goes away at higher rpms. Read more: Vacuum leaks: common sources, symptoms, repairs.

In some older Honda vehicles misfiring can be caused by valves being out of adjustment. Misfiring could be more noticeable when the engine idles after a cold start. As the valve train components wear, the valve gaps change; to compensate, the valves in many Honda engines need to be adjusted at recommended intervals.

In many high-mileage cars, oil leaking into a combustion chamber from worn valve seals and oil rings can foul spark plugs causing misfire; often an engine misfires at idle, but runs better after revving up.

In many older cars, washing the engine compartment or driving through deep puddles can cause the engine to misfire, as water gets into the ignition components and shorts them out. A tune-up with new spark plugs and spark plug cables often fixes the problem. On-plug ignition coils that show cracks or signs of arcing need to be replaced too. In older cars with a distributor ignition, a distributor cap and rotor are also replaced as part of the tune-up.

According to the Hyundai service bulletin 20-FL-001H for the 2017 Elantra with a 2.0L engine, codes P0300/P0301/P0302/P0303/P0304 can be caused a faulty ignition coil. The solution per the bulletin is to inspect ignition coils and, if needed, replace with an updated part and update the ECM software.

Toyota issued service bulletin T-SB-0148-19 for the 2017-2019 Highlander HV that mentions replacing the ignition coil and reprogramming the ECM as possible solutions (depending on diagnostics) for the codes P0301-P0306.

The engine computer or PCM can detect a misfiring cylinder by monitoring the engine crankshaft speed (RPMs). If one of the cylinders misfires, the crankshaft loses momentum and slows down in that moment. If the PCM detects a cylinder to misfire for a predetermined time, it sets the code for the affected cylinder and turns the Check Engine light on.

Can a tune-up fix a misfire? 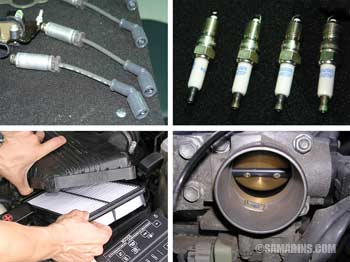 A tune-up is a part of preventative maintenance. To fix the misfire the exact cause must be diagnosed first. A tune up needs to be done every 60,000-80,000 miles. It's best to use only OEM spark plugs.