This 200-hp hot hatch is a favorite of many driving enthusiasts and car fanatics. Despite its small size, the GTI holds the road extremely well. The driver's seat is super comfortable and the interior feels upscale.

The MK6 GTI has front-wheel drive and comes as a two-door or four-door hatch, with a 6-speed manual or 6-speed DSG automatic transmission.

The stock GTI with fast-shifting DSG transmission, can sprint to 60 mph in 6.7 seconds. With that, the GTI is one of the most fuel-efficient sports cars. Of course, if you want to buy a used Volkswagen GTI, you probably want to know what are the common problems?

Volkswagen GTI 2010-2014 Reported Problems: Problems with an early version of the cam chain tensioner can cause a rattling noise at startup. In worse cases, the chain may skip, causing more damage. The tensioner must be replaced with an updated part. There is a way to check the tensioner part number by removing a small plug in the lower timing chain cover. Some owners advise replacing the tensioner with an updated part as a precaution. The timing chain replacement is one of the common repairs at higher mileage, as it can stretch and cause the code P0341. The repair shop may charge up to 7 hours of labor plus parts to replace the cam chain. As with many direct-injected engines with a turbocharger, the TSI is known for carbon buildup on intake valves. This thread at golfmk6.com shows how it looks. Symptoms include sluggishness and misfire at the cold start.

The GTI offers 15.2 cu. ft. of cargo space
Some suggest using a special chemical sold in spray cans to clean the valves without taking the intake out, but it looks like it only works if there is a minimal carbon buildup or as a preventative measure. To clean the valves manually the intake has to come out, which involves a few hours of labor ($400-plus). There are plenty of YouTube videos on the subject.

The crankcase ventilation system (commonly known as PCV) is another trouble spot. Crankcase ventilation system failures can cause a variety of problems, including vacuum leaks, Check Engine light with lean and misfire codes (P0300, P0171), idle regulation codes, and even screeching / whistling noise coming from the engine cover that changes when the dipstick is removed.
The same system is partially responsible for the pressure / vacuum inside the crankcase. Excessive pressure inside the crankcase will cause oil leaks from many places, including the rear main seal. For this reason, when dealing with multiple oil leaks, the engine ventilation system must be inspected. The oil separator (aka PCV or breather valve assembly) is installed on top of the valve cover and is easy to replace. The part is sold online for $69-$160.

Water pump failures are not uncommon. A water pump may need to be replaced because of a failed thermostat, leaks or damage from the oil leaking on the pump. The water pump housing is made of plastic that tends to degrade over time. Anyone who has worked on German cars knows what we mean. 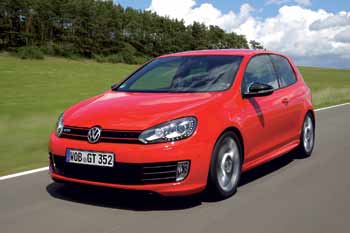 2012 Volkswagen GTI.
Photo: Volkswagen
The water pump is sold online for $230-$360, but it takes a good chunk of time to replace, as it's located under the intake on the transmission side of the engine. The repair shop may charge 3.5-4.0 hours of labor plus parts and extra coolant to replace the water pump. Given the cooling system leaks, it's important to regularly check the coolant level to prevent the engine from overheating.

Other common problems include coolant and oil leaks, failing ignition coils and injectors.

2.0L TSI Engine: In the US and Canada, the MK6 GTI comes with only one motor: the famous 2.0L TSI, (CCTA Federal or CBFA California).

Volkswagen GTI 2.0L TSI engine
It is an advanced dual-cam engine with direct injection and a turbocharger with an intercooler. It has a cast-iron cylinder block with two balance shafts, one on each side of the block. Read also: Pros and cons of turbo engines.

CCTA or CBFA: In the MK6 (2010-2014) GTI, the CBFA engine comes with Secondary Air Injection. The engine code is printed on the cylinder block behind the oil filter and on the sticker on the upper timing chain cover (CCT = CCTA, CBF = CBFA). You can also tell by the 5-th digit of the VIN number (V = CCTA, D = CBFA).

Timing belt or chain: The TSI engine has a maintenance-free timing (cam) gear chain. The oil pump and the two balance shafts are driven by separate chains, making 3 chains in total.

Is a used Volkswagen GTI a good car to buy? The GTI is a blast to drive and has a nicely-finished interior, but it won't be trouble free and will need some repairs here and there. Parts are not cheap too. On the other hand, if you know what you are getting into and don't mind to get your hands dirty, it's a great little hatch. If you want to make your GTI faster, there are many high-quality mods available. We noticed that the online VW GTI community is very supportive and there are many "how-to" videos, so if you like fixing your car yourself, you won't have troubles finding a video on the repair.

As with any turbocharged engine, the 2.0L TSI is sensitive to a lack of maintenance. The maintenance schedule on the VW Canada website shows 15,000 km oil change intervals. The U.S. maintenance schedule shows 10,000 miles. In our opinion, oil changes must be done more frequently if you want your engine to last. The oil quality is important too, we advise using premium synthetic.
The DSG transmission oil and filter should also be changed more frequently to keep the transmission clean inside. It's also important to watch out for leaks and keep an eye on the coolant level, as low coolant can cause overheating.