1. Mechanical problem with the shifter cable or link

Transmission Range Switch (Sensor)
The first common problem with this setup is when the cable or some other part of the mechanism rusts, wears out or becomes loose. For example, see this photo of a rusted shifter cable connection at the transmission side. 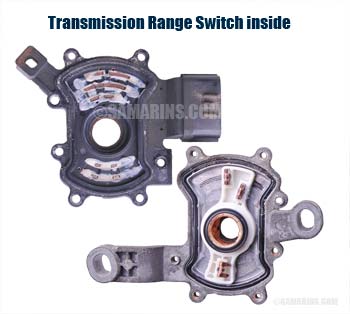 The repair depends on the diagnosis. If there is minor rust at the cable/linkage, simply lubricating the affected area might help.

Lubricated pivot point at the shifter cable connection
In other cases, the rusted part might need to be replaced. For example, in this Mazda in the photo, a rusted lever at the transmission range switch has been replaced and the connection lubricated. It's a $20 part and a fairly simple repair.

Another example: In some older Ford trucks with the column shifter, one of the brackets that holds the linkage under the dash can become loose and the truck would not start in Park - watch these videos describing the repair. The symptom is the same, the dash indicator is not lined up with the shifter position.
Advertisement


Read Next:
Why a car won't start when you push the Start button?
The engine cranks, but won't start
Starter motor, starting system: how it works, problems, testing
How to check a fuse in a car?

Alternator, how it works, testing, problems