Radiator in a car: how it works, symptoms, problems, testing

The radiator is part of the liquid engine cooling system in a car. The cooling system maintains the operating temperature of the engine by removing the excess heat generated by combustion.

Cooling system diagram. Click for a larger image
It's filled with liquid coolant (antifreeze) that circulates between the engine and the radiator. 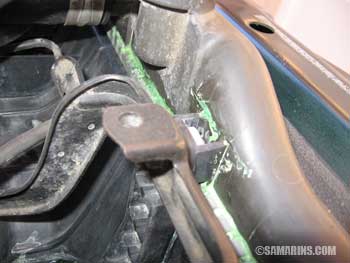 Coolant leaking from a crack in the radiator
The most common problem with radiators is when they leak. Leaks can originate from the area around the seal between the radiator core and the top or bottom tank or from a crack, as in this photo.
Often the radiator core can be damaged by some object or corrosion. Symptoms of a leaking radiator include coolant drops under the front end of the vehicle, a wet lower portion of the radiator, low coolant level, rising engine temperature and a lack of heat from the vents when the car is stopped at a red light.

It's important to repair cooling system leaks as soon as possible because a lack of coolant can cause overheating of the engine; a severe overheating can even damage the engine.

Radiator fins separated due to corrosion
The radiator may also need to be replaced if it can no longer provide sufficient cooling. This could happen if the tubes inside the radiator are partially restricted or the radiator core fins are badly corroded as in this photo.

If the vehicle is often overloaded (e.g. when towing), it's a good idea to use a heavy duty radiator as a replacement.

Another reason to replace a radiator is when the transmission fluid cooler built inside the radiator leaks.

How the cooling system is tested

Radiator
Replacing the radiator in an average car in a repair shop will cost 1.5-3 hours of labor plus the parts and extra coolant. For example, the Mitchell 1 Estimating Guide calls for 2.5 hours of labor to replace the radiator in the 2007 Ford Explorer (plus 0.6 hr. for Aux A/C). Often, the thermostat is replaced at the same time.

Can a leaking radiator be repaired instead of replacing? In some cases, the aluminum core can be repaired with soldering or other methods. It takes quite a bit of time and not always works, but if you want to try, there are plenty of Youtube videos on this subject.

Another option is to see if there is a local radiator repair shop that can repair a leak. If it's noticeable cheaper than replacing the rad with a new part, it's also worth considering.
Read Next:
Thermostat: how it works, symptoms, problems, testing
Engine coolant temperature sensor: how it works, symptoms, problems, testing
Check Engine light: what to check, common problems, repair options
How car parts and sensors work