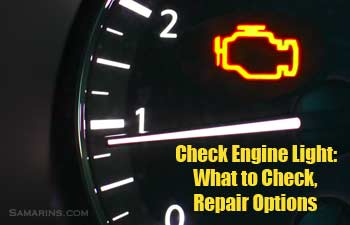 We found several problems that are common in many cars and often produce similar symptoms. They are listed below. Of course, the causes might be different for different cars. To find out the exact cause and repair the problem, you will need to have your vehicle scanned for codes and properly diagnosed. For more information and ways to save money on diagnostics and repair, read this article: Check Engine Light: What to check first, repair options. 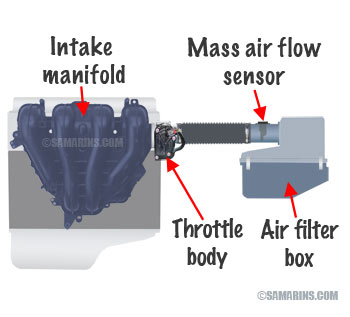 Mass airflow sensor.
A faulty or dirty airflow sensor may also cause problems. Symptoms of an engine "running lean" or a bad airflow sensor include RPMs fluctuating up and down, stalling, rough idle, difficulty starting and a lack of power. Often an engine starts, but stalls right away.
Common Check Engine fault codes related to this problem are P0171 and P0174, P0101, P0102. Read more about the mass airflow sensor and vacuum leaks.

When a catalytic converter becomes clogged up, the engine may start and run well at idle, but bog down when accelerated. The rattling noise coming from the catalytic converter and the smell of unburned fuel from the exhaust may indicate that the ceramic structure inside the converter has disintegrated.
The most common Check Engine light codes: P0420, P0421 and P0430. Read more: Catalytic Converter: problems, replacement options.

EVAP system purge valve.
The EVAP system prevents the gasoline vapors in your gas tank from escaping into the atmosphere. The EVAP system is sealed and if there is a leak or the gas cap is not closed properly, the car's computer turns the Check Engine light on.

On-plug ignition coil.
An engine "misfires" when one of its cylinders doesn't work. Symptoms of a misfiring engine include shaking, running rough and a lack of power. When the engine misfires, the Check Engine light flashes on and off repeatedly or stays on solid.

Sometimes misfiring happens at a cold start and goes away when the engine is revved. In most cases, misfiring is fairly easy to diagnose. One of the most common causes is a failed ignition coil. Foiled spark plugs, clogged or bad fuel injectors, carbon buildup on intake valves, vacuum leaks are among many other possible causes. Read more about the causes of misfiring in this article: Codes P0300 - P0308. 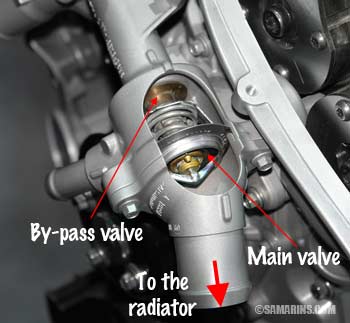 Thermostat inside the housing. Ford engine cutaway. Click for a larger photo
The thermostat in a car is the valve installed within the engine cooling system. It helps the engine warm up faster when it's started and maintains the proper operating temperature when you drive. Some modern cars have an electronically controlled thermostat called a coolant control valve that does the same job.

Bad EGR valve
The EGR or Exhaust Gas Recirculation is one of the vehicle's emission control systems. It reduces the combustion temperature by redirecting a small amount of exhaust gases back into the engine intake.

The main component of the EGR system is the EGR valve. Often, carbon deposits and soot accumulate inside the valve, preventing it from opening and closing. This will cause the Check Engine light to come on.

Symptoms of a sticky EGR valve include stalling at idle, rough idle, engine. Sometimes these symptoms happen after exiting the highway. In some cars, when the EGR system is clogged up, the Check Engine light may come on, but no other symptoms would be present. Common fault codes: P0400, P0401. Read more about the EGR system and EGR valve. 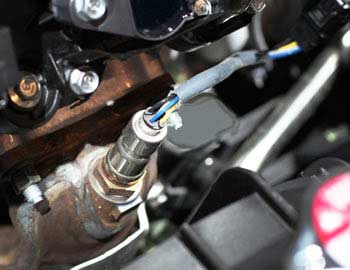 Air fuel (A/F) ratio sensor.
An air/fuel ratio sensor that is commonly known as a front oxygen sensor is the primary sensor in the fuel injection system. Installed in the vehicle's exhaust, it provides feedback to the engine computer on how efficiently the engine runs. The rear oxygen sensor monitors the operation of the catalytic converter.

Alternator, how it works, testing, problems